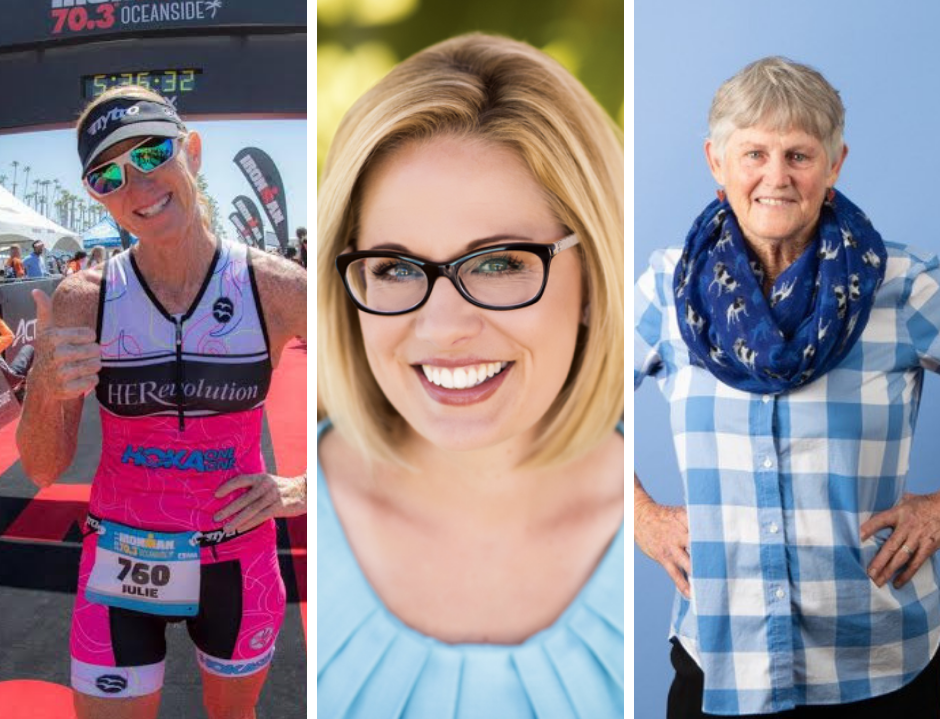 Julie Moss, Kyrsten Sinema, and Sally Edwards Look Forward to Discussions About Women’s Equity in the Sport of Triathlon.

Julie Moss became the instant global icon and the public face of fitness and endurance sports with her famous collapse and crawl to finish second in the 1982 Ironman Triathlon World Championship. Continuing to inspire millions to challenge themselves in triathlon, Moss recently won her age group at age 58 in the 2017 Ironman North American Championships and looks to compete in the 2018 Ironman World Championship.

“I’m so proud to be part of the Outspoken Women in Triathlon Summit. I never expected to be a trailblazing pioneer in the sport, and I certainly never dreamed that I’d end up being one of the women to put Ironman on the map. Figuring out your passion and purpose can be a challenge,” Moss says. “We need strong women role models to support our dreams, and we need to come together to support each other. It will be a privilege to connect with the outspoken women who continue to put the sport of triathlon on the map.”

Aside from her lifestyle as an avid runner, triathlete, and Ironman competitor, Kyrsten Sinema serves as the U.S. Representative from Arizona’s 9th Congressional District. During her childhood, Sinema’s family went through tough times and for a while, they were even homeless. This life experience of adversity taught Sinema the power of overcoming obstacles and helping others. Now, Sinema feels the duty to serve and giveback to her community, which extends to women in triathlon.

“Endurance athletes are strong and resilient, and I am thrilled to be part of the triathlon community,” Sinema says. “I’m so excited that women from all over are coming together to advance our sport in my home state of Arizona. As chair of the Women for Tri Advisory Committee, I am pleased to share the work we are doing with women globally to advance participation in our sport. The Outspoken Summit is doing important work to elevate women in triathlon, who remain underrepresented. It is critical that we support each other as women triathletes, and today we recommit to our work to advance women in the sport we love.”

Sally Edwards is a pioneer in the sport of triathlon, co-founder of USA Triathlon, and author of four book titles on triathlon. “The excitement and enjoyment that women experience training and racing in triathlons is worth it all,” Edwards says. “I know firsthand the power of triathlon to make positive changes in women’s lives. I believe that the Outspoken: Women in Triathlon Summit will result in the same transformational change for all who attend.”

Joining Moss, Sinema, and Edwards as speakers at the Summit are:

Triathlete is the world’s #1 triathlon resource, published by Pocket Outdoor Media. Pocket Outdoor Media’s brands influence and engage more athletes than any other outlet through a combined print, online, and social audience of 44 million runners, cyclists, triathletes, and swimmers. Our brands include VeloNews, the authoritative voice of cycling; Triathlete, the world’s #1 triathlon resource; Women’s Running, the world’s largest running magazine for women; Competitor.com, the most trusted website for runners; and VeloPress, the world’s leading publisher of books on endurance sports. Pocket Outdoor Media is headquartered in Boulder, Colorado and has an office in San Diego, California. See more at Pocketoutdoormedia.com.

The Outspoken Summit is a partnership between Live Feisty Media and Shift Sports. Live Feisty Media produces the “IronWomen” and “If We Were Riding” podcasts, hosts written content at Livefeisty.com, and provides live video coverage at numerous triathlon events in North America. Shift Sports is dedicated to assisting triathlon organizations, teams, and events in initiating and sustaining inclusive practices by looking beyond participation numbers alone. Register for the 2018 summit at Outspokensummit.com.