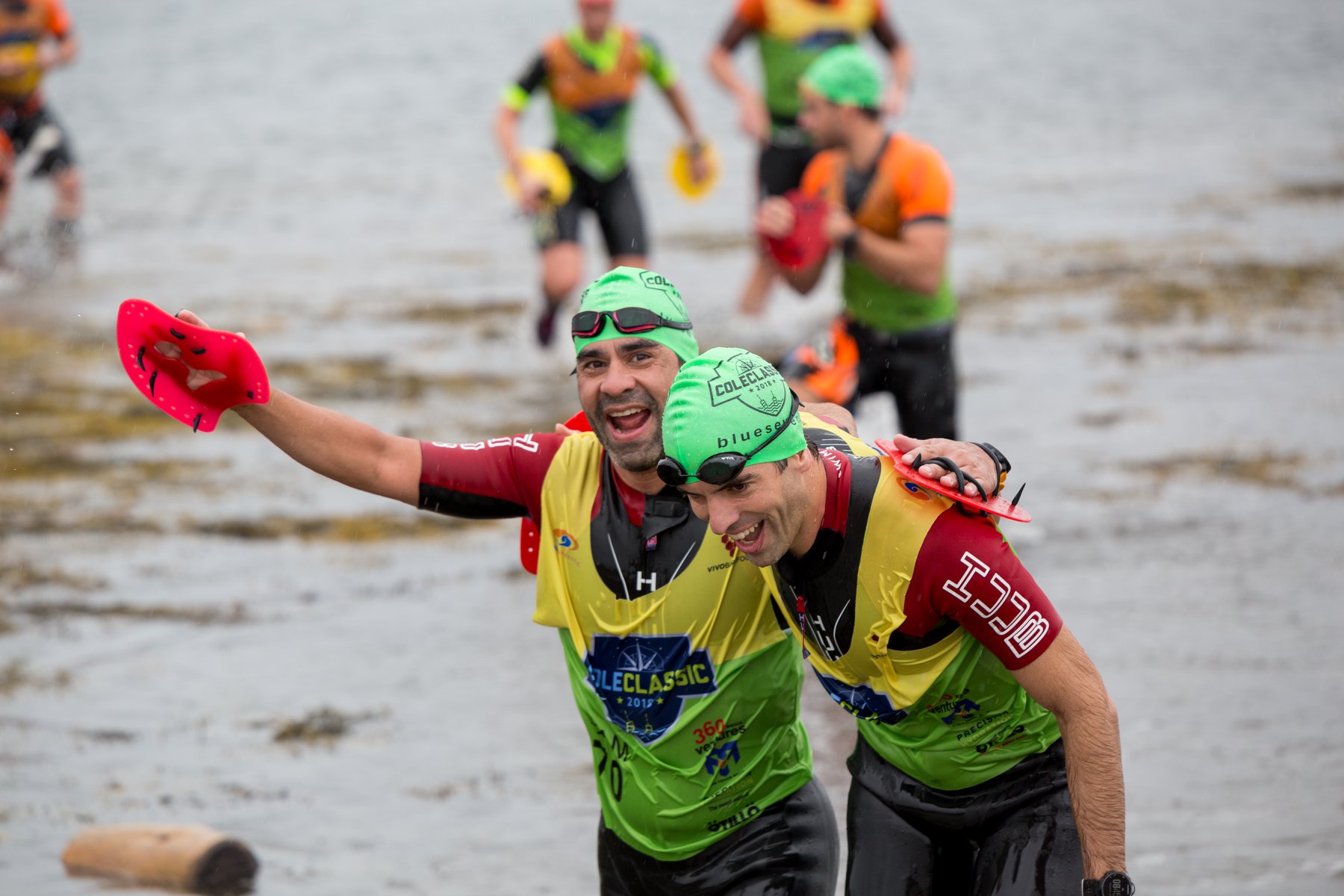 If We Were Riding’ is a weekly triathlon-ish newsletter written by Kelly O’Mara and produced by Live Feisty Media. Subscribe to get it in your inbox every Wednesday morning. You can also read past issues. This episode is from Aug. 15, 2018.

I don’t want to jinx it, guys, but I think I’m about to start training for real again. Maybe I needed the hard mid-season break. Maybe I needed a disaster of a race, with a glimpse of potential in there. Maybe I just needed something wacky fun without pressure to remind me what the point is anyway—which I got in the form of the Swimrun race Sara and I did this past weekend (more about Swimrun below). Because you know what all of this made me realize: You know what’s the most fun? Winning. [Not that I actually win lots of things. But metaphorical winning. Burying yourself and achieving the goal.] The high is just higher in those situations, man. And it’s time to chase that high again.

This weekend Sara and I finally raced the Swimrun USA event in Casco Bay, Maine. (Photo: Not of Sara and I, but from Maine Magazine’s Faces Maine gallery of photos by Matt Congdon) And, yes, we *will* be talking about it on this Friday’s podcast, including how we briefly got lost, what we learned, and why you should do one of these races immediately.

Check out the podcast:

Generally a race from island to island, so that essentially you run across one island and swim to the next. That also means you have to carry all of your gear with you the whole time: swim in your shoes, run in your wetsuit. To compensate, you’re allowed to use paddles/fins/pull buoys—but you also have to carry that with you when you run.

Oh, and it’s done in pairs, so you and your partner have to stay within so many meters of each other.

(The world championship Otillo Swimrun race in Sweden made the New York Times last year, though the story is really mostly a profile of Rich Roll, but that’s still sort of mainstream acceptance, right?)

The sport is wildly popular in Europe and made its way over here a couple of years ago. Which brings us to the Swimrun USA race in Casco Bay.

It’s more or less the first real Swimrun race in the U.S.—though now there are quite a few races. And it’s in the original spirit of the thing: over a string of islands off the coast of Maine. It is crazy and grassroots, the maps are merely suggestions, you have to swim through kelp and wade through mud and scramble over rocks and make choices about which beach you’re trying to get to. And it’s super super fun.

Why is it so appealing?

Partially, the appeal *is* the craziness.

Swimrun is weird and bizarre and not focused on time or place. And that’s what draws people. There’s been a lot written about how the sanitized version of triathlon (and road racing and running) is struggling to attract people precisely because it is sanitized. There’s been quite a bit written about Swimrun too, perhaps as an antidote to this.

(Certainly, there are Swimrun races that are less totally insane. There are a growing number of beginner lake/park-based events. But let’s assume the majority of Swimrun races are still across crazy terrain and trails and rivers and oceans.)

But here’s the thing: A lot of the counter-reaction to the sanitization and streamlining of endurance sports has reeked, instead, of a kind of bro-y snobbish exclusion. As if the masses have discovered triathlon and dumbed it down (and, in so many cases, what is meant is women have dumbed it down) and so instead they must re-erect barriers around their secret clubhouse of “real” sports.

Swimrun Casco Bay did not have this vibe at all. It managed both to be exceptionally hard and wildly welcoming. Yes, we had to prove we were capable of swimming a certain distance in order to be accepted. But anyone who meets that standard is in the same boat out there, all of us trying to figure it out together.

I don’t think it’s an accident the race was nearly 50% women. Or that so many teams were co-ed. Or that the co-ed teams often are able to win the whole thing outright. (The top co-ed team this weekend was just a few minutes out of first overall in the long course. The top team in the short course was a mixed/co-ed team. The overall winners at the big Rockman race in Norwaywere a man and woman.)

Is Swimrun the future then?

Yes and no. Yes, it will continue to grow and there will be more events. Yes, people love these races. But part of the appeal is they are inherently limited in how big they can be. Those Maine islands simply can not handle many more athletes; Casco Bay Swimrun has to be capped at 400-500. I don’t think that’s a bad thing, though. Endurance sports need the in-between races, of different sizes and types; not everything has to be a 2,500-person 70.3. Does that mean it’s the future or just an important part of the future?

How do you pick races?

This brings us to something I’ve been thinking about for a bit: How do you pick races? Do you ask people and Google and pull together different information from lots of sources? Or do you just go to the Ironman calendar and click around? (I know you do that sometimes. I do that sometimes too.)

I’ve made the argument before: One of the major obstacles mid-tier and independent races face is in the race selection process. And a third-party verification and calendar system would ultimately help them. Right now, we all go to Ironman’s website because we *know* Ironman will (probably) put on a solid race with a certain guarantee of safety and competency. Conversely, we don’t always know which local race directors are good and which ones suck—unless we already know or we know know who to ask, but both those things are ultimately barriers to registration. We can’t know which cool new events are worth trying or which are the well-organized ones. We need a system that eliminates the need to know who to ask, that makes it easy to verify or search for all events.

That time of year

If you’re one of the people who cares about all the ins-and-outs of who is qualifying for Kona and who is on the cusp and who needs what place, then this is the most exciting time of the year for you. The first cut-off for 2018 Kona qualification passed recently; the second is coming up and people are scrambling to earn their last qualification points. This year will be the last year with the points scramble, since it’ll be the last year using the points qualification system for pros (at least until Ironman decides to change its mind again). Next year the pro triathletes move to the new one slot per race system.

Now that we’re almost done with this year’s qualification, those who are in the know and crunching the number have compared the two systems. I think the two main points I’ve taken away from the analysis were obvious from the beginning: 1. It’s clearly still weighted towards more male pros competing at the world championships because it’s still based on a system of proportionality. 2. Since athletes will be forced to accept their slot immediately at their qualifying race, there is a greater chance they later pull out and the slot then doesn’t roll down to the next athlete. This second point is actually likely to be a big problem for 70.3 worlds.

The start lists were also announced this week for the 2018 70.3 world championships this September in South Africa. These slots were allocated via the points ranking system. And it’s clear the slots rolled down *really far* as athletes with more points turned down their spots because of conflicts or other priorities. But under the new system for 2019, those athletes will likely accept their slot at their qualifying race so they retain the option, later choose to not race, and then the spot will not roll down to the next athlete. That’s going to be super annoying for the people who were hoping to qualify…